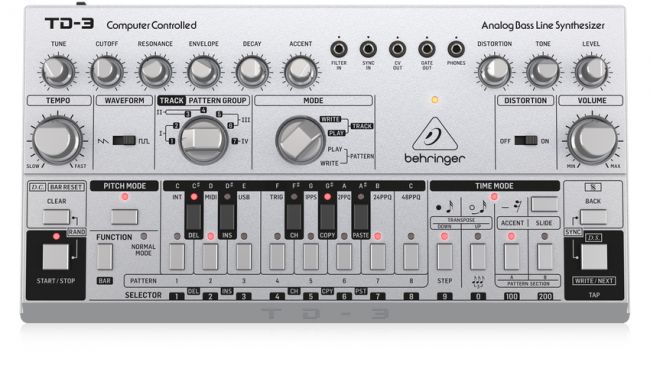 Dan Baker session musician and arrangements use multiple instruments and we thought you would like to know what guitars & other string instruments Dan uses. So here is the best…

If you didn’t already believe that Behringer is about to launch a Roland TB-303 clone, you certainly should now: the TD-3, as it’s known, has leaked.

We’re still expecting an official announcement tomorrow, 8 November, but a webpage detailing the product – which has since been taken down – has already gone live, with images and specs posted on the Gearslutz forum.

It seems that the TD-3 sticks pretty closely to the TB-303’s design and specs – it’ll be interesting to see what Roland has to say about that – bit with the addition of a distortion circuit that’s based on the Boss DS-1 pedal.

As such, this looks to be an all-analogue instrument that’s based on the original TB-303 circuitry. Leaked specs suggest that you get a sawtooth and square waveform VCO, a 4-pole low-pass resonant filter, a 7-track 16-step sequencer and an arpeggiator.

16-voice Poly Chain, meanwhile, enables you to connect multiple units for 16 voices of polyphony, and there are the obligatory MIDI and USB ports.